On the eve of the parliamentary consultations to determine the next Prime Minister of Lebanon and, as rumour has it, the long-awaited indictment of the Special Tribunal for Lebanon (STL), the Secretary General of Hezbollah Sayyed Hassan Nasrallah delivered a speech this evening in which he declared March 8's decision not to nominate Hariri again for the post. Hezbollah's ally Michel Aoun, head of the Free Patriotic Movement, had earlier in the day made a similar declaration. Both stressed that their opposition to Hariri's return to the premiership is not solely related to the STL, but also to the shoddy performance of the government and its incompetence. 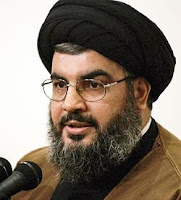 Nasrallah was however atypically downbeat in his delivery. Tellingly, he did not claim that the opposition has the upper hand in the prime ministerial nominations, hinting that March 14 may still have a numerical advantage in the parliament. Aoun, on the other hand, was much more forceful and assertive. This may explain the sense that many within the FPM feel that they are no very close to forming a March 8-led government and implementing their reform programme. If they can summon the parliamentary majority, that is their constitutional right and they should be allowed to do so without foreign intervention. Yet, I can't help but wonder about the timing of this move and the new-found political reform project.

The March 8 mass-resignations from the cabinet were triggered by the failure of the much-hyped Saudi-Syrian effort to deliver a deal that would absorb the impact of an STL indictment of Hezbollah members. March 8 claimed that last-minute American pressure scuppered the S-S initiative as it is known and forced Hariri to walk away despite allegedly having agreed to several steps that would distance the Lebanese government from the STL. What March 8 is not publicly discussing is what their side of the deal would entail, but it was largely understood to mean their continuing participation in the national unity government and maintaining support for Hariri as Prime Minister.

This is where I think March 8's hypocrisy becomes obvious. A week ago they were willing to lend Hariri their political support in return for distancing himself and the Lebanese government from the STL and its indictments. Today, they have suddenly realised that the level of corruptness and mismanagement in the government can no longer be tolerated. Despite this, certain March 8 figures, including Nabih Berri the speaker of the parliament, have continued to indicate that Hariri can still secure their support if he accepted the terms of the Saudi-Syrian deal. At one level, this indicates that the March 8 is far from certain of gaining the upper hand in the parliamentary consultations in the next two days. Secondly, it indicates that despite the rhetorical emphasis on reform, their real aim remains the dismantling of support for the STL.

Finally, it's worth nothing that Hezbollah's position and that of the FPM are not exactly aligned, and this must put pressure on their alliance despite outward appearances. The Saudi-Syrian deal would have unburdened Hezbollah by eliminating the STL danger, or at least ameliorating it, leaving them in a secure position within the Lebanese power structure. But this deal would have hit the FPM hard since it remains very vocal on reform, a position which will only suffer by their continuing participation in a Hariri-led cabinet. A March 8 government would suit the FPM well, but not so much Hezbollah. It remains to be seen whether Hezbollah and its allies would actually summon the support and the political will to go through with such an endeavour, but given the circumstances, I expect the possibilities of this actually happening to be very slim.

A political reform project cannot be born suddenly out of an impasse in Saudi-Syrian negotiations and the complex circumstances surrounding the STL indictments. It would take more than this to make me believe that March 8 have stumbled upon such a project. I am afraid that we're in for another protracted round of the usual horse-trading, a tie on Tuesday would be the earliest indication of this.

Postscript: I'm not given to idle speculation, but given that it's the national pass time I think those two scenarios are likely: Firstly, March 8 is allowed to form a cabinet with the tacit approval of Hariri. Its main function would be to annul the agreements with the UN regarding the STL and remove support from it without Hariri's participation. Such a cabinet would have a short life and be followed by Hariri's return to power. Secondly, no clear name emerges out of the consultation, leading to a political vacuum during which the STL indictments are not acted upon in Lebanon. Again, we will get an indication on Tuesday.
By Karl Sharro at January 16, 2011