"He who never destroys what he has built, ever stands

On this terrestrial world, which itself never stands still,"

says Hariri, who is no Frenchman by birth, but an Arab."

(Karl Marx, On Freedom of the Press) 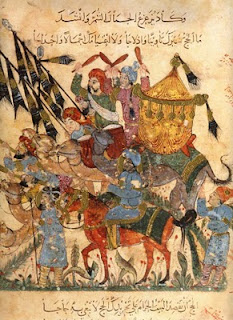 No, not that Hariri, but Abu Muhammad al Qasim ibn Ali al-Hariri, the medieval Arab poet best know for Al-Maqamat, his popular book of anecdotes (al-Hariri comes from my mother's hometown, Basra in Iraq).

I particularly like the next passage that Marx quotes:

"He who has a tongue and does not speak,

Who has a sword and does not fight,

What is he indeed but a wretched wight?"

Many claims have erroneously been made about Marx's Euro-centrism, this is completely untrue. His vast knowledge of other cultures says otherwise.

The other misunderstood dimension of Marx's work is his emphasis on freedom. A lesson for censorious leftists today...

Email ThisBlogThis!Share to TwitterShare to FacebookShare to Pinterest
Labels: on the lighter side