The issue of Hezbollah’s weapons had divided the Lebanese for a long time. In the last few years it has become the central question of Lebanese politics without a shadow of a doubt. Hezbollah’s insistence on maintaining its large arsenal and military capabilities is considered by its political opponents a destabilising factor. They have insisted on implementing the state monopoly on arms as a precondition for the emergence of a fully sovereign state. But such a state monopoly is not universal; America is of course the obvious example among many. Would the American model throw some light on this thorny issue in Lebanese politics? 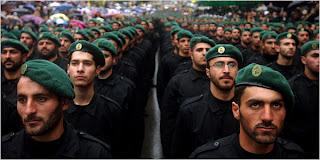 Let’s first make a clear distinction in relation to Hezbollah’s weaponry: even their staunchest opponents do not publicly deny their right to use the weapons in resisting Israel, regardless of how strongly they feel about the subject in private. In fact during the last round of national dialogue discussions Hezbollah’s most vocal critic Samir Geagea proposed a surprising initiative that would allow the party to stay an independent unit under the army’s control. The more controversial aspect of Hezbollah’s military capabilities is its ability to deploy them elsewhere in the country, which remains the most contentious issue facing Lebanese politics.

The turning point on this issue occurred on the 7th of May 2008, when Hezbollah and some of its allies responded to the state’s attempt to control its communication networks by storming Beirut and subduing its opponents. Prior to that, Hezbollah had insisted that its weapons would never be used internally. Since then it has maintained that it would not allow any moves to interfere with its military capabilities. Many commentators sympathetic to Hezbollah considered the 7th of May events to be a precedent that should be maintained. In other words, the state should not be allowed to undermine Hezbollah’s military readiness, by force if necessary.

The slogan ‘arms in defence of arms’ now represents this oppositional stance between Hezbollah and the Lebanese state. This situation is of course a product of Lebanese politics, but it’s by no means a particularly Lebanese phenomenon. In fact, the second amendment to the US constitution deals with a very similar set of questions like those around Hezbollah’s arms, albeit with significantly different historical and socio-political circumstances. The principle being debated, the right to bear arms, remains quite pertinent nevertheless.

This is particularly evident when we examine the discourse surrounding both instances: how Hezbollah justifies its arms and how the right to bear arms was framed within the bill of rights. The American provision went further than most other nations that allowed individuals the right to bear arms. Debate about punctuation aside, the second amendment text reads ‘A well regulated Militia, being necessary to the security of a free State, the right of the people to keep and bear Arms, shall not be infringed’. The right to bear arms in America was stipulated as a necessary right, even a duty, to prevent tyranny.

There’s a certain similarity between this framework and Hezbollah’s arguments today. In both cases, there’s a suspicion of the state’s authority and its potential to threaten freedom justifying the need for popular militias. Hezbollah’s suspicion of the state is founded on historic grievances and experiences. It stretches back to the periods of state neglect of the Shiite areas and extends to the recent past when several supports were shot by security forces in mysterious circumstances. Considering this troubled relationship, is Hezbollah justified in keeping its arms? And is it, ironically, operating according to the spirit of the American constitution?

The insistence by Hezbollah’s opponents that the consolidation of state sovereignty could not be achieved without the party surrendering its weapons is definitely not a straightforward principled argument. The American example shows that the monopoly on arms is not a necessary condition for the consolidation of state authority. Admittedly, this legislative provision has been subjected to manipulation in practice but its constitutional validity persists until today. There’s certainly a strong argument in favour of keeping checks on state power. But how relevant is this to Lebanon?

If we’re discussing theoretical principles, I think I would find it very difficult to make an argument against Hezbollah’s arms, even without considering its role in fighting Israel. But the problem is that the right to bear arms needs to be applied universally for it to be meaningful. Would Hezbollah accept if the other factions had their own militias? And, more importantly, haven’t we been there before? Hezbollah would tend to make an exception for itself in this instance based on its record and its trustworthiness, but many Lebanese would find both unsatisfactory in the post-7 May Lebanon.

I must admit that the analogy with the American version of the right to bear arms is a bit of a ruse. Despite the superficial similarities with Hezbollah’s situation, there’s of course a significant difference. Whereas the militias were meant to be independent of the state as an important condition to fulfilling their role, Hezbollah has become a very important and powerful part of the political establishment. That is the paradox of Hezbollah’s condition today: it cannot be both within and without the state. It cannot have a large parliamentary block and a militia. This is the choice that Hezbollah needs to make today, in or out?

On the eve of the clashes between Hezbollah and Al-Ahbash, Hassan Nasrallah gave a speech in which he said one very important sentence that did not get the attention it deserved. Nasrallah said that the opposition could oust the government through the parliamentary process and does not need street protests to achieve that. Nasrallah was boasting the fact that his political alliance now outnumbers his opponents in the parliament. The obvious question that nobody asked is why is Hezbollah reluctant to take power now that it could command a parliamentary majority?

Hezbollah fears such a prospect because it would formalise its position of power within the political establishment. For now, it prefers to operate in the ambiguous margins it has created for itself. It’s hanging onto its weapons not out of necessity but out of the need to preserve its self-image as a rebellious militia when in fact it has become precisely the opposite.
By Karl Sharro at September 07, 2010