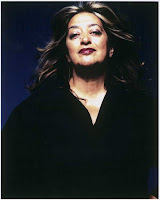 Zaha Hadid has been appointed as the architect for the new Iraqi central bank in Baghdad, after the existing building was attacked in June. They could have asked a more reasonable Iraqi architect like, I don't know, me, but they decided to go with the big name. But joking aside, this should be interesting.


I wonder what Baghdadis will make of Zaha's design? Deconstruction doesn't quite have the same impact there, when almost every public building has been 'deconstructed' by a bomb or 'redecorated' with concrete barriers and security devices. The 'subject' has also been severely tested over the past three decades, any displacement tactics devised by Zaha are likely not to sit well.  We will have to wait and see.

The existing central bank was designed by Danish firm Dissing+Weitling (I know, sounds like something an angry old man does.) It pretty much follows the typology created by Rifaat Chaderchi for several public buildings in Iraq, but with a more bulky exterior. I'm curious to see Zaha's alternative.

Note: Zaha's collaborator Patrik Schumacher, mentioned in The Independent article above, will be taking part in ManTowNHuman's first Winter School for architecture students which we are holding on the 17-18 November in London. Click here for more details.
By Karl Sharro at September 20, 2010