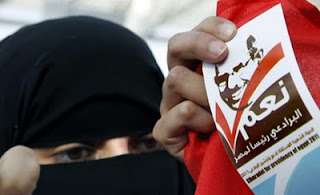 
Elbaradei hasn’t announced his formal intention to run for president yet, but he has signalled his intention to run if certain conditions were met. Under Egypt’s current rules, it would be almost impossible for him to do so. In 2005, constitutional amendments were introduced to allow multi-candidate presidential elections. Until then, the popular vote was used to approve or reject a candidate appointed by parliament in a referendum. Hosni Mubarak had won four consecutive six-years terms through this charade process. The new rules that allowed multiple candidates to run also stipulated that candidates must serve as head of a licensed political party for one year, provided that the party has been around for more than five years.

Elbaradei’s other option is to run as an independent candidate requiring him to have the backing of 250 representatives across both houses of parliament. Both houses are controlled by Mubarak’s ruling National Democratic party making this option very unlikely. Elbaradei has laid down a number of conditions before he runs: written guarantees that the elections will be free and fair, supervision of the vote by international monitors, and a constitutional amendment allowing independent candidates to stand. This somewhat indicates that Elbaradei is more interested in fighting a PR campaign against the government than mounting a serious presidential bid. No doubt that he can put his high international profile to use to that end and use media support to exercise pressure on the Egyptian government.

This however will be more of a distraction than a genuine political challenge to Egypt’s rulers. That was precisely the problem of the campaign mounted against Mubarak in the 2005 elections by the Egyptian Movement for Change known in Arabic as Kefaya (Enough). Generously referred to by commentators as a ‘grassroots coalition’, Kefaya  was an eclectic mix of media-savvy individuals and NGOs that were more adept at talking to western media than connecting with the Egyptian people. Despite attracting a lot of attention they failed to galvanize into a broad-based political movement that could challenge the ruling elites. The disparate political trends within Kefaya, Nasserites, Islamists, Leftists and Liberals, tried to coalesce around the lowest common denominator of opposing Mubarak, in the process relegating politics in favour of an anti-corruption and human rights based discourse. Not surprisingly, this did not find a wide appeal among the Egyptian people.

So far, Elbaradei’s bid seems to resemble Kefaya’s campaign in those aspects. Elbaradei has talked vaguely about democracy without giving any real indication of what this means in the context of Egyptian politics. But more important than anything the man himself has said is the discourse that has surrounded his entry into Egyptian politics and its articulation in the Egyptian and Arab press. A writer in the influential Lebanese daily Al-Akhbar described him as an “..outsider to the political game. He is unguarded in speech, allowing the public to appreciate his freedom and his rejection of the complacency that is stifling political change.” The outsider images has been a favourite theme in the Arab press since the commotion about Elbaradei’s campaign started, the implication is that Elbaradei is untainted and uncorrupted by the way in which politics is practiced in Egypt.

Aside from the factual inaccuracy of describing Elbaradei as an outsider, the enthusiasm shown towards the ‘outsider’ as an agent of political change resembles more a low-grade from of Messianism than a genuine political movement. Elbaradei’s path to the IAEA Secretariat started with a career within Egypt’s diplomatic service culminating in his membership of the team that negotiated the peace agreement with Israel in Camp David in 1978. His subsequent career with the IAEA was always governed by Egypt’s relationship to the US and other international powers as most of the high profile appointments within the UN are. This doesn’t necessarily mean that Elbaradei is yet another member of Egypt’s ruling elite, for all we know he could be a genuine political contender, but the nature of the reception that his possible candidacy has received indicates more a desire for an untainted outsider to act as a saviour rather than a leader emerging from within.

The enthusiasm about Elbaradei’s bid is understandable in the context of a stagnant political scene in Egypt that has failed to challenge the authoritarian rule of Mubarak for decades.  The only movement capable of galvanizing large sections of Egyptian society at the moment is the Muslim Brotherhood, but it has long ago given up any ideas of challenging the system and is content to maintain the status quo which allows it to continue to exist within very clear limits laid down by the ruling elite. The other parties are too weak and disjointed to represent any serious political challenge to the status quo. Against this backdrop, Elbaradei seems like a breath of fresh air injecting some hope and excitement into this stagnant political scene and inspiring hope among Egyptians with his bold talk of change and critique of the system.

But this expectation is based on a misplaced faith in technocrats that is in reality deeply apolitical in nature. This manifests itself clearly in another common theme in the Arab press this week, the idea that Elbaradei is disdainful of power which is seen as a positive attribute. To a certain extent, this is a remnant of an archaic notion in Arab society that leaders should not seek power but should accept it if it’s thrust upon them. However it is an idea that has found a contemporary resonance among alienated and disgruntled Egyptian citizens as it appeals to their disgust with politics. In its most outlandish forms, this alienation from politics finds expression in the notion that technocrats are the most capable of running the country if politicians didn’t get in the way. The popular expressions of this alienation range from the notion that all politicians are corrupt to the idea that politics itself is a dirty business. In fact, these sentiments feed into a sense of fatalism and disengagement from politics that is not a product of Arab character as some commentators suggest but a contemporary expression of apolitical impulses.

Elbaradei in that sense ticks all the boxes, and the hype around his possible bid has focused extensively on his credentials as a capable technocrat and someone who’s not ‘tainted’ by politics. This in fact prescribes very strictly the parameters of how far his venture into politics can go from the onset. Worse still, this very high-profile campaign will feed into the prevailing anti-political sentiments within Egyptian society, diverting energy and attention from the more urgent political work of building a movement with clear aims for political change.  Such a movement can only be built on political engagement and not on the avoidance of politics. It also needs to address the wider Egyptian public and not only the urban middle-classes that pushed Kefaya into the limelight very briefly only to fade away after that. So far, Elbaradei’s campaign bears the hallmarks of a sequel to that episode.
By Karl Sharro at March 04, 2010