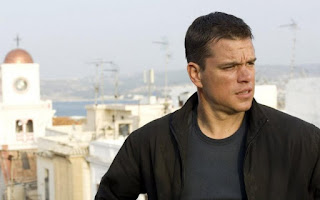 The film opens with the lead character waking up on the sea shore only to realize that he is suffering from memory loss. He discovers that he is fluent in several languages, and often uses three different ones in the same sentence, but he cannot remember anything about who he is. From here on, the film becomes a tale of one man’s quest to discover his identity, in an echo with Beirut’s contemporary obsession with its own identity.

Jason Torn’s only clue is a tattoo on his left arm that depicts a cedar tree over the map of Lebanon with the number 10452 in the center. For a while, he assumes that this number refers to the land area of Lebanon in square kilometers, until he realizes it could be a phone number and tries calling it. A cryptic-sounding voice answers, asking him what he had for dinner last night. The question triggers something in his memory and he finds himself replying ‘hummus’, although even though he actually had a falafel sandwich with extra tarator sauce. The voice tells Torn to go to a bank in downtown Beirut and ask for his deposit box. (NB: The bank is yet unnamed, if you are interested in featuring your bank in the movie, please contact the producers.)

On arriving at the bank, Torn is recognized by the manager, a portly man in an Armani suit wearing a gold Rolex, who greets him. “Bonjour, Mr. Torn. Kifak? We have not seen you for a long time. I assume you’re here for the deposit box?” After negotiating his way through a long conversation about the ski season and the latest restaurant in town, Torn is led to his safe deposit box, where he retrieves a suitcase.

What he finds inside the suitcase throws him into shock, as the viewer will be able to tell from the alarmed expression on Torn’s face and the trademark grimace that only Mr. Matt Damon can convey so convincingly. Inside are several Lebanese identity cards, all with Torn’s picture but with a different name and religious sect on each. On one he is the Maronite, Tony Shalhoub. On another, the Sunni, Ahmad Itani and on a third, the Shia, Hassan Hamieh. (NB: This is highly unusual for Lebanon, as most TV series and films give neutral names to actors, like Ziad Adel or Samir Ra’ed, that don’t have any religious or sectarian connotation. )

In total, Torn finds 18 different identity cards, each with a different name, sect and place of birth. The discovery exacerbates his identity crisis and he is traumatized by his finds. He decides to do one of those inevitable shower scenes that are used to convey angst and loneliness, where the actor leans his head on the wall and allows the water to run down his body or sometimes sits on the floor in a gesture of resignation. Torn strips off and enters the shower cubicle, only to realize that there is no water.

He snaps at this discovery. Wrapping a towel around his waist, he goes out onto the balcony and starts shouting at his ground floor neighbor, Um Ali, accusing her of using all the building’s water. He vents his anger at her son, Ali, who regularly uses up the building’s water washing his car, with no consideration to for the other residents. (NB: This will be one of the most intense scenes in the movie, neatly capturing the tensions of everyday life in Beirut in a nuanced way. )

Torn’s clash with Ali escalates when the latter confronts him and alleges that he is politically-connected., Trying to intimidate the frustrated Torn, Ali waves a gun in his face screaming “Do you know who I am? Do you know who I am?” Torn briefly considers replying in kind but then he remembers that he himself doesn’t know who he is. With a series of rapid movements, he disarms Ali and leaves him writhing on the ground after punching him several times. To his amazement, Torn realizes he’s a martial arts expert but somehow, he still has no clue what his real identity is.

Amongst the other things that Torn discovered in the suitcase were a handgun equipped with a silencer, several credit cards, cash in various currencies, electronic equipment and a membership card at Lebanon’s prestigious club, ATCL. (NB: It is a large suitcase.) This makes Torn think that he is some kind of spy or undercover operative but this being Lebanon, the suspicion doesn’t narrow his search, as he could be anything from an Israeli spy to a Syrian mukhabarat or a member of one of Lebanon’s multiple security agencies.

Torn decides to do some research online to see if he can find out more. He goes on Google (NB: or another search engine willing to pay for product placement in this blockbuster), and types in his name. Google (NB: or Bing, if Microsoft is willing to pay, and let’s face it they need the publicity), returns a number of matching results in his name, but most of them seem to be about some upcoming movie called ‘The Torn Identity’. One stands out, an article on an American website. Torn clicks on it, but Lebanon’s notoriously slow internet frustrates him yet again as the page refuses to load. He swears at his neighbor George, who must be watching porn and using up all the building’s bandwidth.

Torn then decides to visit the Important Information Security Branch because he remembers that one of his ID cards shows him to be an officer there. On arriving at the headquarters, he is recognized by some officers and they start chasing him through the streets of Beirut. Torn stops a car and drags out the driver, hoping to start an exciting car chase scene. But he has forgotten that this is Beirut and traffic is blocked for miles. The security officers are in a car just behind him. After twenty minutes or so of waiting, Torn and the officers get become frustrated and decided to do the chase scene on foot instead.

We’re in a crowded urban neighborhood but suddenly, the chase moves to another part of Beirut and, we are not quite sure how, but Torn is being chased by the officers along the Corniche. This allows the camera to show the beautiful sea front and the residential towers behind. Our hero then passes in front of the marina, with the expensive yachts, which is edited to make Beirut look like Monaco. Moments later, he is racing through a poor seafront neighborhood, and it becomes apparent that this thrilling action sequence is also a social critique of contradiction and inequality in Beirut.

Cleverly, Torn evades his chasers and makes his way back in to his apartment. He finds that there is no electricity so he lights a water pipe and sits on the balcony smoking and thinking. To his surprise, he discovers that he can do several Lebanese accents convincingly, from a Tripoli clothes merchant to an Armenian photographer, furthering his sense of disorientation about his identity. Frustrated again by the futility of his search, he decides to go out, as it is almost midnight, and besides, it’s a great opportunity to showcase Beirut’s fantastic nightlife.

Predictably, Torn meets a woman called Randa, at one of the bars he visits in Mar Mikhayel, and he enlists her help in his quest to discover his identity. Surprisingly, Randa has her own secrets and the story unfolds over the next sixty minutes, in scenes of joy, surprise and laughter, which build to the eventual moment of recrimination. “You think you are the only one looking for himself? Lek hawn, ya aiyni! Everyone here is looking for themselves!” Randa shouts at Torn as the contradictions of their crossed paths reach a climax. This is a deeply moving and symbolic moment in the movie and to get to this crisis point, Torn has to beat up a number of people along the way, including some valet guy who steals his parking spot outside Mandaloon.

By the end of the film, Torn has discovered just enough about his real identity to satisfy the audience but some revelations will only be hinted at, in anticipation of the two or three sequels that will follow. Torn and Randa’s relationship has become romantic in nature, because Beirut is modern that way. The film ends with a beauty shot of them eating bouza on the Corniche, as the camera pans away to the snow-covered mountains in the distance.
By Karl Sharro at November 24, 2015