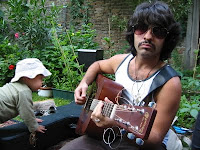 Last year I reviewed General Suleiman, and I may have been too harsh on the borrowed imagery in the video clip and the soft satire it employed. Zeid explained at the time that the idea for the song came out of the political frustrations of the power vacuum that the country experienced, and how he saw the election of General Suleiman as a positive step. The song is in fact a plea for change, for stability, for normalcy. As a result of the authorities' incompetence, lack of humour and heavy-handedness, perhaps it will now spark a genuine drive for change. The reaction to the detention has been swift, the news travelled very quickly and protest will hopefully follow very soon.

While it's tempting to defend Zeid on the basis that the song isn't actually offensive, I think this is the wrong approach. What we need to defend here is the freedom of expression, without qualifications, and push for abolishing the archaic laws that provide the legal basis for such arrests. No politician or public figure should be beyond critique, and they shouldn't be allowed to use those laws in a desperate bid to gain the respect that their political record hasn't gained them. The role of art and music isn't to flatter the fragile egos of insecure public figures. Let's say a resolute no to these forms of intellectual intimidation and fight for our freedom to offend the clique of fools that is ruling us.

Update: It has now been confirmed that Zeid was freed from detention earlier. It's still not clear who ordered the arrest amid denials from official agencies. The law that punishing criticism of the president is being arbitrarily expanded to apply to the internet allowing cases like Zeid's to happen. Abolishing this law and stopping it from being used to police the internet should be a priority for those who want to defend the freedom of expression in Lebanon.

If you would like to be updated about posts on this blog and other articles I publish, follow me on Twitter.
By Karl Sharro at July 27, 2011