The silly guide to forming a cabinet in Lebanon 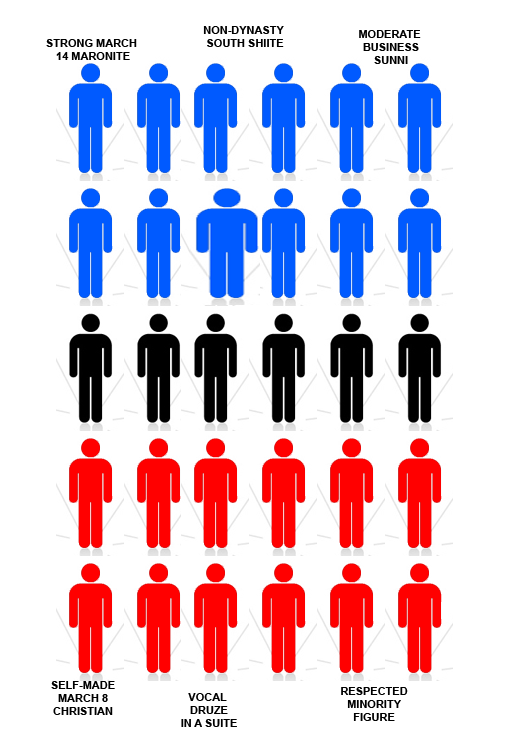 With the news that a new Lebanese cabinet (of the minister-ish not the woody variety) has been nearly formed, we thought we would provide a simple guide to this elaborate and highly complex procedure involving complicated balancing acts and political acrobatics that make a Mensa test look like a children’s puzzle. So here goes:

First, the cabinet must be split evenly between Christians and Muslims, which is why cabinets rarely have an odd number of ministers. An odd number makes splitting a cabinet evenly very difficult but not impossible because normal mathematical laws don’t apply in Lebanon. For the purpose of this exercise Jews are either ignored or counted as Christians. Although theologically suspect, this is justified on the basis that they have Christian names.

Secondly, most of Lebanon’s eighteen officially-recognised sects must be proportionally represented in the cabinet. This doesn’t reflect their actual numbers, that would be too crass, but their number multiplied by a factor representing how insecure they are. For example, the Maronites have a factor of 4, whereas the Greek Orthodox have a factor of one. My own minority sect has a factor of 0.001 but I’m chilled about it.

Now, if this were a recipe, we haven’t even bought the ingredients. The next hurdle is dividing the ministers, preferably without physically cutting any of them up, between the major political camps. For the past decade, the main camps are split between the 8 March and 14 March groupings. These are loose coalitions in which everyone hates everyone else, but not as much as they hate people in the other coalition.

There are two jokers available. One is the President and the other is Jumblatt. The President changes every six years, or six years of 18 months each occasionally, but Jumblatt is always Jumblatt, although it’s difficult to tell what that actually means. The jokers are used either to resolve the differences or complicate the situation in case the process is going smoothly which wouldn’t be in keeping with the spirit of the game.

Now we’re nearly there and all we have to do is make sure that all the regions in Lebanon are also represented equally in the cabinet. While of course making sure that the four sovereign ministries are split between the big sects. These four are finance, interior, foreign and defence. Including defence in the sovereign ministry is an inside Lebanese joke.

Now say you have a strong Maronite from the North as minister of energy then you have to make sure the minister of water is a Shiite from the south. He or she (haha) can either be a strong Shiite or a weak Shiite from a strong Shiite party but not both. Now you have to consider either a Druze or a Greek Orthodox for public works, but the Druze has to be from the mountain not the Beqa’a while the Greek Orthodox has to be from Beirut. But from a political dynasty not a newbie.

Usually it’s wise to tackle the big ministries first. Say you have a 14 March Sunni from the south for finance, (business not dynasty), then you might balance that with an 8 March Shiite from the Beqa’a but with an American education (on a scholarship not family money). At this point, you have the choice between a vegetarian Druze from the mountain for defence or an army Maronite from Keserwan for the interior ministry but obviously one who doesn’t speak English.

You could always play a joker for defence, although good luck to you if you’re going to try that. A presidential joker might work, but only in the first three years of the President’s term, (or the first two 18-month years.) A Jumblatt joker for defence can rarely, if ever, work, but it has stronger chances when the Eastern wind is prevailing. At this stage, it’s good to buy some time by suggesting a Protestant for education.

Now say you’re nearly done but you discover that you have two heavy Muslims for intermediate ministries but only one heavy Christian. You could either start all over again or use the Edde exemption, which allows you to nominate a fat Christian for balance. But be careful with the Edde exemption, you don’t want to use it more than once in a cabinet or it will mess the seating arrangement. The country is still trying to recover from the aftermath of the 1993 experiment where two fat Christians were included unwisely.

Did I mention the 9-9-6 versus the 10-10-10 distribution? When resolving the balance between March 8, March 14 and the President, but only when the President is phlegmatic and Jumblatt is at the end of a cycle, a cabinet majority becomes impossible and an equal distribution needs to be found. Think of these as football formations, but ones that are intentionally designed to ensure a draw. These balanced formations are particularly useful when the result of the parliamentary elections cannot be agreed on beforehand and the parliament extends its own term until enough people have died or immigrated or both.

Keep in mind that the Lebanese are very innovative and these rules are constantly changing. As of 2024, we anticipate that new categories will be introduced so, for example, we will be looking for a gay moderate suited Sunni from the North with a degree in business or a strong non-party disabled Armenian from Beirut.

Oh, and did we mention sorting out the license plate numbers of the ministerial cars?