The Paradox of the Fragile Revolutions

It is perhaps a sign of these uncertain times that our perception of the Arab uprisings has been accompanied by a deep sense of anxiety. While the uprisings provided the most inspiring examples of political change we have witnessed for a long time, they have also been perceived from the beginning as fragile revolutions. This apparent contradiction fits with the wider political context that the uprisings were born into and that impacts on how outside observers and the Arab people demanding change perceive them. This is the paradox of the Arab uprisings: the apparent resurgence of political agency in an era in which the nature of that agency is understood primarily through its limitations.


Why not celebrate Halloween in thematic style this year and commemorate the Arab Spring? We’ve put together a list of suggested dictator outfits that could be easily assembled with tips on making the right choice for you. We also provided a handy rating system for glamour and difficulty levels.

Ali Abdullah Saleh
Yemen’s president is one of the least glamorous Arab dictators and is a bad choice. He used to wear dark suits before the explosion that claimed half of his ear and left him badly burnt, but started dressing in more traditional attire since. This phase of his career is more suitable for Halloween but might be a bit in bad taste.
Difficulty: 3/5 Glamour 2:/5

Email ThisBlogThis!Share to TwitterShare to FacebookShare to Pinterest
Labels: Arab Dictators, Arab Spring, Halloween, on the lighter side

The Looming Threat of Online Censorship in Lebanon

I read this Daily Star story about Lebanon’s plan to ‘organise online media’ with a combination of alarm and amusement. I am alarmed by the censorship role that the National Audiovisual Council has been playing increasingly in recent years, but I am also amused by the incompetent authoritarianism of the Lebanese political class and its fumbling efforts to control the dynamic online scene. I should stress that this is not a characteristic that is unique to this government but is something that it shares with the previous March 14 cabinets.

It’s likely that most online users, bloggers and activists will ignore this latest initiative by the archaic NAC and treat it as the irrelevance that it is perceived to be. However, this creeping censorship role should be taken more seriously and opposed widely. While such battles with authority may not sound as glamorous as the Arab uprisings, it is important to defend the relative freedom of expression and speech that exist in Lebanon. It is also important to oppose such measures as that proposed by the NAC, requiring all Lebanese websites to register with the council for example at the risk of facing a ban, on principled grounds and not on fickle and instrumental grounds.


Watch the interview that I did with RT about Gaddafi's killing and what the near future holds for Libya.

A diagram of Lebanon's War and Peace 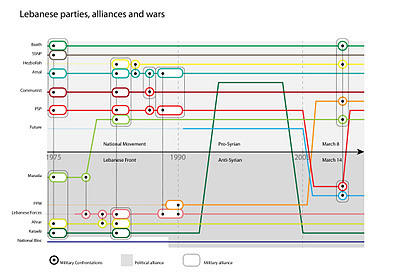 The diagram maps the conflicts and shifting alliances of Lebanon's civil war and the post-war period, up to the present day. The way the diagram works is it traces which side each party was on and when it shifted direction along a line from 1975 to the present.It also maps the alliances and conflicts along the way, often between parties on the same side. The dividing line represents the major political camps over the past three and a half decades, although that is not necessarily how everyone understands them.

The diagram is still work in progress and is missing many details so comments are welcome, both on form and content. Parties like Al-Morabitoun, Islalmic Amal, and Elie hobeika's Al Wa'ad, among several others, are not yet represented. I have taken some license in representing the FPM, associating it with its leader even though that's not exactly accurate. I have left out the Palestinian organisations, Syria and Israel for now as I try to work out how to place them without biasing the diagram. Again suggestions welcome. Click on the image for a larger version.

Thanks to Lina Abou Rislan for designing the diagram.

The image above has been doing the rounds on social media, with many claiming that there is a conspiracy to keep the world from seeing it. It allegedly shows a huge Occupy Wall Street demonstration near the Woolworth Building in New York. Some have even talked of the 'photographer' being harassed. Now this would be very entertaining if it's wasn't so sad that many intelligent people are falling for an obviously doctored photograph. Not only it's doctored, there's no photographer because it's taken from Google Maps. Here's the link for the image as it appears now on Google, and you can see that the same picture (above) has been doctored to show thousands of people on the street.
Continue reading »
By Karl Sharro at October 07, 2011 No comments: