An Ingenious Plan: How the CIA Vets the Syrian Rebels

So the decision has been taken, and the US will start training and arming the Syrian rebels after vetting them in Jordan. Now we all know what a capable organisation the CIA is so we should all be optimistic about this daring plan. The minor fuck-ups that the CIA has been involved in during its existence should not be a reason for us to doubt this carefully-considered plan. In order to illustrate the strength of its vetting programme, the CIA has allowed us to sit in on a few of those interviews scheduled to begin next month. Below is an accurate transcript of how they went:

Email ThisBlogThis!Share to TwitterShare to FacebookShare to Pinterest
Labels: CIA, on the lighter side, Parody, Syria

Following months of indecision and paralysis, the US administration today revealed an initiative for President Barack Obama to flip a coin to decide what course of action to take in Syria. The unexpected declaration has electrified the on-going debate over Syria and sharply divided opinions within policy circles.

President Obama announced the initiative in a press conference held at the White House this morning, outlining the reasons for this unusual but not unheard of strategy. In a typically dramatic gesture, Obama took a coin out of his pocket and lifted it up and declared “this is change we can believe in.” This was interpreted by analysts as a reference to Obama’s popular election campaign slogan in 2008, and was seen as an attempt to tie the initiative to Obama’s earlier idealistic policies.

Email ThisBlogThis!Share to TwitterShare to FacebookShare to Pinterest
Labels: Obama, on the lighter side, Syria

Exclusive: What is Nick Griffin doing in Beirut?

The Leader of the BNP Nick Griffin is in Beirut and has tweeted several times from there. Here's a sample:

There's lots of speculation about what he is doing there. Here are the most likely scenarios:

Email ThisBlogThis!Share to TwitterShare to FacebookShare to Pinterest
Labels: Beirut, BNP, on the lighter side 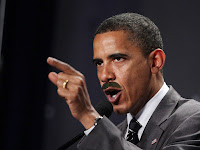 Speaking in front of a loyal ruling Democratic party audience on the White House lawn, Obama announced defiantly “it’s time to consolidate the piecemeal encroachment on civil liberties and increasing surveillance into a clear formal structure that is unapologetic about its role in defending our freedoms. The experience of our Arab friends and allies will be crucial in implementing this reform and this is why we are calling it The American Mukhabrat as a tribute.”
Continue reading »
By Karl Sharro at June 07, 2013 28 comments: