Exclusive: The Text of Jumblatt's Letter to Bashar al-Assad 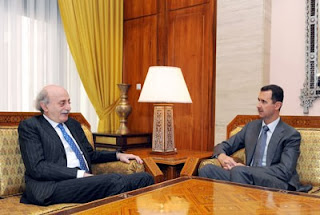 As the Daily Star reported today, Walid Jumblatt sent a conciliatory letter to Bashar al-Assad. In an exclusive scoop, we have obtained the full text of this letter that signals major shifts in the region in the coming period.

I am writing you at this critical juncture of the history of the heroic Arab nation, hoping that you will have the foresight and patience to hear what I have to say. Yes, I am indeed back in one of my pan-Arab phases. I don’t understand why people criticise me for those phases that I have, I think of them as the equivalent of Picasso’s periods. They are expressions of my political creativity. ‘Principles, principles’ they say. So boring.


I decided to write this letter because I woke up the other day with my moustache twitching towards the East. And if life has taught me one thing it’s to trust my moustache. This is my moustache’s way of telling me to rebuild the ancient bridges between The Mountain and Damascus, the beating heart of Arabism. Some cynics will tell you it’s because the Americans have let me down once again, but don’t listen to them; they don’t wish to see us reconciled.

Bashar and Walid, Walid and Bashar. We have been at this for so long. We’ve had our ups and downs, like Ross and Rachel from Friends. I know you were bitter when I flirted with the Americans that time, but to borrow Ross’s phrase ‘we were on a break!’ But this time I am sincere, I’ve had it with the Americans.

If you think about it, you and I have so much in common. We both inherited power from our Socialist fathers. How many people in the world can say that? Aside from the Kims in North Korea obviously. You and I are true socialists who have socialism in their blood. We have to stick together, comrade Bashar.

So what do you say we let bygones be bygones and put this whole thing behind us? I don’t know what came over me when I decided to support the Syrian revolution against you, but it was a mistake. In all fairness I didn’t think you would survive, but you have. And that’s just great. I mean who would have thought you would survive when Saddam and Gaddafi fell, but it’s my luck. My luck to share with you the joy of victory over the conspiracy obviously.

I’m sending this letter to you with Talal with a gallon of our best olive oil, you can send your reply with him. I asked him to bring me some of those barazi’a sweets from Damascus, can you make sure he brings some? But don’t poison them, I know all your tricks.

Your comrade in true Arab socialism,

PS. If you need any shopping tips for Geneva, just ask. I have been to several Lebanese war peace conferences in Switzerland, these things are always fun.