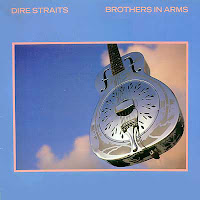 In addition to their glorious music, Dire Straits proved to be prescient in their choice of song titles. Here’s a breakdown of how their song titles match the different stages of the Arab Spring:


Iron Hand
Stage one before the revolution. The dictator rules firmly with, er, an Iron Hand. In the words of the Straits’

On Every Street
The uprising erupts, people take to the streets and the squares to shake the status quo.

Sultans of Swing
Clearly a reference to the Arab League, the ‘Sultans of Swing’. They swing into action by asking for an emergency meeting six weeks from now. Obviously their main desire is to see the uprisings stop.

Brothers in Arms
Self-explanatory. The dictator clings on, the people take to arms. (NOT a reference to the Muslim Brotherhood.)

Money for Nothing
This is an allusion to the role of Gulf countries in funding the uprisings. But, as Mark told them, it’s money for nothing, your funding won’t buy you sympathy.

The revolution turns sour. Maybe a reference to Jihadis.

The ‘do something’ is a familiar refrain in the Arab uprisings, clearly a reference to western intervention.

Walk of Life
It’s about dignity and standing for your rights, the revolution prevails. It is also a reference to victory celebrations running late into the night.

“Dedication devotion
Turning all the night time into the day”

And no, we won’t make a lame joke about it all ending in dire straits…

Email ThisBlogThis!Share to TwitterShare to FacebookShare to Pinterest
Labels: Arab Spring, on the lighter side