Burning the Quran: A superfluous controversy

The most reasonable comment I came across on the Quran burning controversy was written by Lebanese blogger Mustafa aka Beirut Spring. “The more we talk about and vilify the Koran burners, the more we play into their hands.” Mustafa has managed to recognise a truth that has eluded world leaders and commentators alike. Mustafa went on to say:

“They will burn their Korans, go home, and nobody will die as a result. The Muslim world would have finally grown the thick skin it always needed. We would learn the lesson that most other religions have already learned: Just because a fool somewhere calls your religion evil/ignorant/foolish, it doesn’t mean it’s true.” 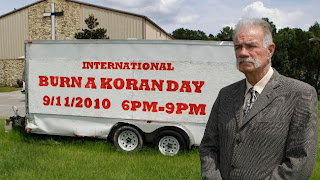 Call me naive, but I think most Muslims are as reasonable as Mustafa. The truly offensive suggestion in this debate is that all Muslims are blood-thirsty savages who will fly into a rage and start murdering people when they hear of the Quran burning. And this is precisely what western leaders and journalists are suggesting will happen, hence their eagerness to stop this burning from taking place.


You can’t judge a billion people by the behaviour of a few extremists. This is true of Islam as much as it of Christianity, the Quran burners do not represent all American Christians and Al-Qaeda doesn’t represent Muslims. This explains the anxiety that this episode has caused liberals in the west. They have such a dim view of humanity that they think the masses will be so inflamed by this as to unleash mayhem.

The liberal media has played right into the hands of the Quran burners, giving them the oxygen of publicity without which they would have been completely ignored. But it has also revealed how authoritarian and fear-mongering it is with all its coverage and calls for intervention. It has in fact revealed how similar to the right-wing press it is. Same outlook, different focus.

Some have argued that allowing the burning to take place will ‘endanger the troops’. What a stupid argument. The troops are in danger because they are occupying foreign countries that they shouldn’t be in. This is another truly offensive suggestion. The idea that Muslims are happy to tolerate military occupation as long as the Quran is not being burned is outrageous.

I have to ask, is this what the world has come to? Every time some idiot decides to indulge in a moronic act, we have to summon the UN, world leaders, international press and the pope to stop him? Can we try a common sense approach like that suggested by Mustafa instead?
By Karl Sharro at September 09, 2010