There’s an important field in which Jews have consistently outperformed Arabs. This has both caused me some anxiety and made me wonder about the reasons. I’m talking of course about comedy. (The anxiety bit is an exaggeration). When I think of my comedy favourites, many Jewish names pop out: Groucho Marx, Mort Sahl, Woody Allen, Larry David, Jerry Seinfeld, to name but a few. By contrast, there are very few Arab comedians that.... actually there are very few Arab comedians full stop. Why is that? 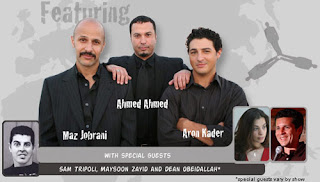 I’m not talking exclusively about stand-up comedy; that would be an unfair comparison because stand-up is in its early days in the Arab world. I’m talking about humour in general in all its forms. Why does it seem like we haven’t produced enough humorists and that the comedy landscape in the Arab world is quite barren?


To add insult to injury, our funniest man ever, probably, Ziad Rahbani, has lifted so much of his material straight from the likes of Woody Allen and Rob Reiner both of whom, you guessed it, are Jewish. For example, the waterfall scene in Shi Fashel is an adaptation of the Stonehenge scene in This is Spinal Tap. The pick-up telephone conversation in Nazl el Sourour is ‘inspired’ by Woody Allen’s ‘library’ routine from his 60s stand-up show. I know that the pedants among you will point out that Spinal Tap came out in 1984 while Shi Fashel came out in 1983, so there’s a tiny possibility that my theory might not be true. So sue me.

Let me return to my original question however, what is the reason for this comedic drought? (I should stop using desert metaphors). Could it be that our love for poetry has somehow diverted us from comedy? Are we too serious by disposition to waste time on humour? Is our culture so unique that we are unable to make it funny for other people? I don’t propose to answer any of these questions, but they help create the impression that I actually have a serious point to make here.


I am sure that some people will hasten to remind me of our rich satirical tradition such as the work of prose writers like Al-Jahiz. "If the length of the penis were a sign of honour, then the mule would belong to the (honourable tribe of) Quraysh". Classic wit. But that was more than a thousand years ago! At that time, the Arabs had the largest empire in the world (good empire, not like the American one). I know that size doesn’t matter, but they also were world-leaders in art, literature, science, philosophy and medicine. Don’t flatter yourself in thinking that we are the same Arabs as them.

The success of Jewish humorists could be explained by the fact that they were always considered outsiders to the societies they lived in, and therefore were able liberate themselves from established conventions. Humour requires this detachment, there’s nothing less funny than conformity. But then many Jews moved to Palestine and created their own society and seemed to have lost their sense of humour. That however supports my theory: humour needs to violate social taboos in order to be genuinely funny.

Which brings me to the The Axis of Evil Middle East Comedy Tour, founded by Jamil Abu-Wardeh. I recently watched Abu-Wardeh give a TED talk about the Tour. I always thought that TED lectures are designed for people who can’t be bothered to read a book and who have the attention span of a two-year old. If that’s the case, then Abu-Wardeh fits the bill. His material was straight out of the ‘let’s use-comedy to bring us together manual’. What was more irksome was his insistence on showing the funnier side of Arabs, ‘we are funny too therefore we are humans like you’. Pathetic. Chip, shoulder?

But Abu-Wardeh’s material inadvertently provides the explanation for the modern decline of Arabic humour. He talks about ‘respecting the "three B's": blue material, beliefs and "bolitics".’ (See what’s he done there? He played with how some Arabs pronounce P, hilarious stuff.) And this is precisely the problem; you can’t be funny when you respect social taboos. And you will be even less funny when you respect taboos and try to promote a message of peace and tolerance through your comedy. Let’s face it; politeness and comedy just don’t go together.

We are conformist on every other level; can’t we at least break free in our comedy? Our deference is standing in the way of very good humour. Think of Al-Jahiz and all those unexploited zoological metaphors.
By Karl Sharro at September 08, 2010