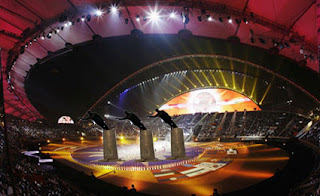 In a spectacular event held in the Qatari capital Doha, the Arab Spring was officially declared over on Friday night. Thousands of Arabs of various nationalities and six Qataris attended the emotional event held at Doha’s National Stadium. The three-hour long ceremony featured hundreds of performers, spectacular firework displays and speeches by Arab leaders.

The decision to host the ceremony in Doha was largely due to Qatar’s neutral position, as it is generally regarded as the Arab country that interfered least in the Arab Spring. Indeed, to highlight Qatar’s neutrality, its international broadcaster Al-Jazeera’s coverage of the Arab Spring consisted mainly of drama and fiction works, avoiding news and factual programmes. This paid large dividends as its received wide acclaim and several awards for its creativity.

The closing ceremony was devised during the recent Arab League meeting when Arab leaders agreed to hold the event to provide a sense of closure and settle the confusion in the minds of Arab citizens, most of whom were uncertain whether the Arab Spring was still taking place or not. This interfered greatly with their plans for the weekend.

Audience members interviewed during the event revealed their support for the decision. Ahmad, 32 from Egypt said: ‘there was a sense of expectation in the air that we’re not used to living with. All this positive energy was starting to get me down, we’re happy that we can relax now.’ Mostafa, 27 from Tunisia: ‘The optimism has become really irritating. Not being able to blame the government, not being to complain, no dictator to secretly loath, it was unbearable. I’m happy we can put it all behind us now.’ Abu Baker, 26 from Yemen: ‘We were tired of smiling for foreign photographers and speaking positively about the future to reporters. This is not in our traditions. Now we can go back to secretly criticising the regime, I feel relieved’.

The collective sigh of relief led a veteran observer to comment that this is the first thing that the Arab League has ever done to please their people. But few paid him any attention as most were absorbed by the party atmosphere and the enthusiasm for things returning back to normal, such as the restoration of emergency laws.

The assembled Arab leaders appeared quite happy, except for the Lebanese president Michel Suleiman who because of the oddity of his country’s political system is not allowed be a ruler for life. But other leaders were uncharacteristically cheerful, and a lip reader hired by the media confirmed that some were whispering ‘it’s over, it’s over’ and ‘we made it’.

In his speech the Egyptian president Mohammad Morsi paid tribute to the Arab Spring that brought him and his group the Muslim Brotherhood to power and joked ‘but we hope the Arab Spring doesn’t become a regular event’, which was greeted by laughter from the crowd. Inexplicably, the crowed kept laughing even when wasn’t telling any jokes.

The performances by school children and professional dancers featured re-enactments of the high moment of the Arab Spring, from the Tahrir Square protests to Gaddafi’s famous ‘umbrella interview’, which was performed by a group of dancers to the tune of ‘Singing in the Rain’. There was also a ‘statue toppling’ extravaganza, but some observed that only statues of leaders in suits were used.

At the end of an emotional evening, the Secretary General of the Arab League Nabil el-Araby declared the Arab Spring officially over closing his speech with ‘and now it’s back to business as usual’ to loud cheers from the crowd. This was truly a night to remember.