Expression current in France in the early years of this century. Describes an insoluble mess. 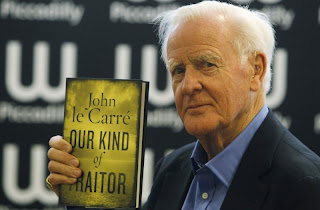 Smiley arrived on a Friday in a rainstorm. The rain fell down like a stream of bullets from a machine gun then drifted helplessly across Beirut’s crumbling façades. The streets in Hamra had begun to fill like a bathtub, which reminded him of the summer he spent with the old man. Smiley was sure the taxi driver that brought him from the airport had over-charged him, then looked at him blankly as he asked for a receipt. The housekeepers at the reptile fund won’t be happy with this.

Smiley wasn’t sure how Control had convinced him to come out of retirement. Syria was beginning to unravel very fast and the PM didn’t want to have another disaster like Libya. The Competition were caught with their trousers down, wondering in the desert dressed like Lawrence of Arabia. The new breed of managers at The Circus were out of their depth and Control dropped the affair in Smiley’s lap. Ann had disappeared six months ago, and boredom had been gnawing at his mind like a hungry rat. He was tired of trying to bridge the gap between then and now and said yes before he had a chance to consider.


On Tuesday, three Circus Clowns had fallen in the hands of the wrong party while attempting a drop twenty miles north of Damascus. Something about a mix-up in the Arabic name of the rebel group, not an uncommon mistake as he understood. Jim was furious about it.

“We can’t tell them apart. The Cousins are keeping their distance and the pressure is on The Circus to handle them privately. How were we to know that the Lions of Damascus Brigade was different from the Damascus Lions Brigade? We run a circus for fuck’s sake, not a bloody zoo.”

A high-ranking Syrian general had made as pass at one of Circus’s Joes in the neighbourhood. The chirping indicated that he had some crown jewels to trade. Circus had declared him Persil and baptised him The Tinker and the clowns were sent for an inspection. The Tinker had insisted that contact was made through a group headed by one of his cousins. Until the fools knocked at the wrong door and now there was a storm brewing.

Smiley’s contact was a Lebanese politician known as The Cat because of his multiple reincarnations. In the old days he used to be a communist, but when the old firm went bust so he switched to the Americans and kept an open mind. These days he was representing Gulf interests in Syria as a free agent. The Cat it seemed was friendly with a Chechen commander of the rebel group that acquired the clowns. The shoemakers were busy looking for a Russian link between the Chechen and The Cat, Smiley had insisted on that despite Jim’s protests.

A familiar pattern had begun to form in the back of Smiley’s mind. Thirty years ago, he would have been certain Karla’s fingerprints were all over this. There were too many twists to dismiss. The Tinker had run the local shop in Moscow for six years for the Syrian circus during Karla’s stint at the Arab Bureau. But Karla had left the business years ago and amassed a fortune through energy concessions. He had even bought a small English football club which has was running with the same ruthlessness of his KGB days.

Control had delivered his assessment with the slyness of a parking attendant, handing Smiley the ticket before he had a chance to protest. “It’s a mess George, and nobody knows what to do about it. We strongly advised against the operation but there’s pressure from above to deliver. We have to be seen to be doing something in Syria. Whatever The Tinker gives us we won’t be able to use, but getting him out will create the impression of action. Get in and out quickly.”

Smiley’s old self-doubts were gradually gathering at the edges of his mind like a storm cloud. He felt he didn’t understand the business any more. The Americans were busy killing people with their new toys, how did he fit in this world? Now they were turning against the regimes whose inquisitors they had been using until very recently. Yet, the prospect of locking horns with Karla again thrilled him. There was unfinished business. But George you old fool, forget about Karla, he’s not there anymore. You’re tilting at windmills.

Gradually he began to admit to himself that he was imagining this as another Cold War encounter with Karla in order to find some sense of purpose to what he was doing. True, all the old players were in Syria now but what was it all about? Were they fighting old battles out of sheer habit? And there so many new players now, who would have thought the Qataris would be playing with the big boys. By the time he reached his hotel room, Smiley was drained. As he reached the lift, the power went out. He began to climb the stairs wearily.

This is obviously not really written by le Carré, but a writing experiment.