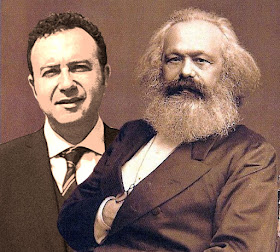 The Revolting Masses: Mr Marx, welcome. It’s an honour to talk to you.
Karl Marx: Thank you, but call me Karl.
Karl Sharro at December 06, 2016 No comments:
Share

A plan to rescue western democracy from the ignorant masses

I was fascinated by this article in Foreign Policy arguing that it’s time for the elites to rise up against the ignorant masses. I thought to myself ‘yes! This is exactly what we need now.’ I am fed up with all this talk of democracy, listening to the voice of the people and respecting popular sentiments; all at the risk of paralysing Western societies. Let’s be honest about it, people are too stupid to understand what’s good for them and we, the elites, have a responsibility to guide them and, when they can’t be convinced, we need to find ways of making them listen to the voice of reason. But how?

How would we report the EU referendum if it were happening in the Middle East?

You can learn everything you need to know about the EU referendum in the United Kingdom by talking to just two people in London. The taxi driver and the millennial entrepreneur type person. They’ve never met, the taxi driver doesn’t hang out in trendy places and the millennial entrepreneur type person uses Uber instead of traditional London cabs, but by talking to each for ten minutes I gathered enough quotes to allow me to write knowledgeably about this debate that has inflamed passions on this small island.