The Prince and CABE 2.0: An even less accountable version

It's emerged that the The Prince of Wales’ architectural charity, the Prince’s Foundation , is contemplating plans to replace CABE as the body in charge of carrying out design reviews. Instead of getting rid of this meddling and intrusive process of policing architectural design, we're now facing the prospect of an even more stylistically rigid organisation heading it. The haphazard nature of the government's decisions leaves the space open for powerful organisations to lobby for this role instead of handing the power back to planning departments as I had argued before. Councils are democratically-elected and accountable bodies, unlike Prince Charles and his foundation which are medieval relics.

The chief executive of the Prince’s Foundation Hank Dittmar tried to deny accusations that his organisation would only favour traditional architecture: “To be credible, it would have to have democratic, independent judgement. We would have to have a panel that was balanced and not exclusively traditional architects.” I am not worried about such a prospect. What I am worried about is the un-democratic nature of review panels.

Architects could build neo-Gothic hotels in central London for all I care. It's time that we learned that the tyranny of taste is not the way to ensure good design. But what we should fight for is the right of architects to make judgments about what they think is right and wrong without subjecting them to an extra layer of scrutiny. We should also give planners with the confidence to champion good schemes and not undermine their authority through committees of the great and the good. This new authoritarian outfit should be resisted before it turns into a reality.

You can watch a debate I had with Hank Dittmar here. The session was hosted by the Urban Design Group and entitled 'Building Urban Communities - What is a City?' I think it's a good preview of the clash of ideas between the authoritarian and backward-looking decision makers and those of us who have an aspirational outlook.
Karl Sharro at October 28, 2010 1 comment:
Share

In defence of factory farming

Jason Smith makes a very good argument in defence of factory farming in response to the Compassion in World Farming (CIWF) campaign against a proposed super dairy at Nocton in Lincolnshire, England. Jason takes on several of the misguided arguments that drive antagonism towards large-scale farming. His article is a good accompaniment to my article against the misplaced faith in urban farming Grow Your Own: Urban Farming: The future of food or Arcadia on the cheap?

I liked in particular Jason's debunking of 'natural' farming:

When will people learn that the romantic views of nature and of the past are not the way to solve our problems today?
Karl Sharro at October 25, 2010 No comments:
Share

The Whitechapel Gallery in London is hosting an exhibition of Walid Raad's work over the past twenty years entitled Miraculous Beginnings. The exhibition features the work that Raad is well-known for, with the Atlas Group project, as well as his more recent work. It is a genuinely fascinating exhibition and I highly recommend visiting it, it runs until the end of the year. 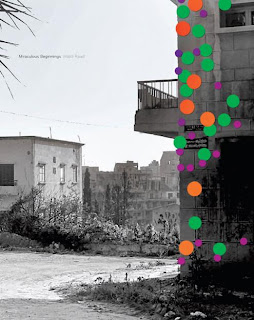 Culture Wars published my review of the exhibition. There's a clear departure in style and content best summed as 'the Historian turned Oracle'. Hopefully, this will intrigue you enough to visit. Raad's work embodies the complexities of modern Lebanon and its history and any attempts at representing it. What more can you ask for?
Karl Sharro at October 21, 2010 2 comments:
Share

A different type of determinism

My colleague in ManTowNHuman Alastair Donald makes a very compelling argument in favour of rejecting 'happy clappy architecture' in his blog at The Independent today.

'Happiness is the latest Big Idea amongst policymakers and social scientists.  And given architects now justify design almost entirely in terms of delivering social policy, it was probably only a matter of time before attentions turned to shaping our feelings.'

'Ultimately, it seems there’s little genuine interest in creating the possibility for people to pursue their own happiness, but rather using design to cultivate conformism with other agendas. It’s surely time to reject happy clappy architecture.'

Alastair also echoes an argument that I made several times, most recently in my essay on happiness in architecture, that the popularity of 'designing behaviour' accepts a form of environmental determinism. When I accused David Harvey of pandering to environmental determinism by suggesting that there's 'geographic subconscious' at play in modern society, I was flooded with a barrage of pedantic comments claiming that I misunderstood Harvey who had indeed made his own critique of determinism. Someone even hit back by suggesting we discuss 'the effect of suburbia on the political impotence of the middle class in the US'. To my mind, this is the clearest example of determinism I can think of.

But an important distinction must be made here: we are not talking about evolutionary determinism but about a form of social determinism that is even more problematic. The acceptance of 'nudge' policies is a good example of this, as Alastair rightly points out. Evolutionary psychology has been utilised to provide the theoretical framework for this new paradigm and to give it a scientific gloss. Many 'social determinists' are critical of this 'scientific' approach but they seem oblivious to the convergence between their own thinking and that of evolutionary psychology. Namely, that they agree on limits to human agency that they see as beyond our control.

The most patronising and dismissive manifestation of this argument is the 'brainwashing' idea: people are too taken by the system to realise what their own good is. Not surprisingly, this idea is more popular with the left, but this popularity is a clear expression of the left's failure to connect with large sections of society. Rather than being self-critical and understanding how it lost touch with the masses, it turns to blaming the people for being too stupid or brain-washed. Of course, the idea is rarely expressed in this vulgar form, but the assumptions behind many of the arguments we hear today stem from those exact sentiments.

Josie Appleton write a great article today in Spiked about the new movement in Spain fighting against the smoking bans: 'Meet the Spaniards fighting to stub out authoritarianism'. At a time when most people are looking back nostalgically at May '68, few people remember that they were motivated by the spirit of freedom. This was clearly expressed in the slogan ‘Il est interdit d’ interdire’ or 'to ban is forbidden!' The Spanish movement adopted a similar slogan ‘Prohibido prohibir’, as a reminder of what the real issue with the smoking bans is.

Appleton makes several interesting points, but I liked in particular the distinction that those behind the movement are careful to make: this is not about smokers against non-smokers but everyone against the authoritarian and intrusive state that wants to regulate even the most basic aspects of social interaction. In all likelihood, smoking in Europe will disappear within a few generations but the principle is well-worth fighting for.
Karl Sharro at October 21, 2010 No comments:
Share

'Cabe was architect of its own demise'

Amanda Baillieu echoes some of my thoughts on why CABE should be abolished in her BD blog. Like me, she thinks that CABE is a design police force, although she stretched the metaphor a bit: 'It was a design police force run out of the equivalent of the Kremlin.' She also thought that the functions of CABE should be part of the planning system and not as an external agency. Few people today would agree that 'planners aren’t there to tell us what’s good design', but I wholeheartedly embrace this sentiment. Fat chance of this happening.

Now that the fate of CABE has been decided, I must stress that it was abolished for the wrong reasons and not part of a major reform of the planning system. The consequence will be that CABE will be reborn in a different shape, less costly but as intrusive.

A thought for all those losing their jobs, we must express our solidarity with them. They are not responsible for CABE's actions but will face the consequences of New Labour's flippancy and authoritarianism and the coalition's crisis-management mentality which they're attempting to pass off as policy.
Karl Sharro at October 21, 2010 No comments:
Share

Zaha Hadid has finally won the RIBA Stirling Prize today, for the MAXXI contemporary art museum in Rome. The Stirling Prize is the UK’s most prestigious architectural award and the choice of Hadid as winner is a bold decision that should be applauded. Zaha has been nominated three times without winning,. This year the jury finally recognised her achievements and the boldness of her designs. 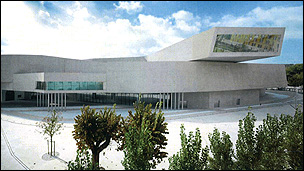